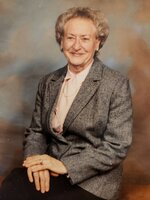 Lila L. Moses (Born March 22, 1924 in Burlington, Kansas) passed away peacefully on July 15, 2022 at 98 years-of-age in Castle Rock, CO. Lila was the third of 10 children born to Cecil and Ruby Huyett. She was wife to Winfred H. Moses, Mother of two children, Doris J. Schmidt and Duaine E. Moses who preceded her in death. She is survived by; her sisters Ruby and Hazel, her brother Clyde, her daughter-in-law Cynthia Moses, 7 grandchildren 15 great-grandchildren, and 11 great-great-grandchildren. Lila was a witness to so many changes in the world. She was 5 years old when the Great Depression began, and 15 when it ended. Being a teenage girl at that time could not have been easy. She lived through World War II and many wars following that. Her wisdom was vast; her kindness genuine; her love unconditional; and she had a great sense of humor. Well, she kept us entertained most days. She was an avid bowler who bowled in several leagues and received many awards. She frequented the bingo parlor for many years. As she put it, "That's where the real money is." With the ability to swiftly dab 12 cards at a time, she was a bingo machine. She worked alongside her husband at their own trucking company, and then with her children at their janitorial company. She was also a waitress at a diner for some time. She said she really enjoyed it. Being the waitress that she was, road trips with her always included truck stop pie. She knew where to find the best. She made friends easily wherever she would go. Everyone who met her fell in love with her instantly. If there was one thing she was famous for, it was her awful waffles (because they were awfully good). They had a great shape to them because they were made in her vintage waffle iron. Most of the time they were topped with strawberries and whipped cream, but occasionally she served them slathered with her rhubarb concoction. We have lost a family treasure. Her presence will be missed, but she can rest now with her children and our lord.