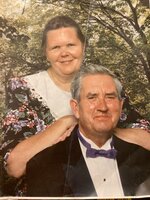 Lynda Margret Junker January 17, 1944 - January 17th, 2022 Lynda Margret Junker was born January 17, 1944 in Compton, California to James and Thelma Zolman and went home to be with her Lord and Savior on January 17th 2022 in Denver Colorado. Lynda was the middle of five children and was always considered the peace maker at home. She Joined the United States Marine Corp when she was eighteen years of age and was Honorably Discharged in 1964 as a PFC. While on leave from the Marine Corps, she met her future husband Eugene, who was on leave from The Air Force at the time, and twelve days later they married. Lynda and Gene had five children together, adopted two additional children, and became the guardian to a newborn. Lynda was a Christian and a longtime member of The Bible Missionary Church, where she ran the Church Food Pantry for many years. Lynda was deeply passionate about helping others and became a distributor for Toys for Tots. She impacted hundreds of lives with this selfless ministry, brought up twenty-four foster children on her own, and will be missed by many. As Lynda prepared to make her journey to her heavenly home, she said †œDon't cry for me I am going to heaven." Lynda is preceded in death by her parents James and Thelma Zolman, her Husband Eugene Junker, her daughter Diana Junker and two brothers Darrell and Mark Zolman. She is survived by her sisters Janet Eaton, Charlotte Zolman and her brother Duane (Marty) Zolman. She is also survived by her sons Timothy Junker, Gary Junker, Robert (Rebecca) Junker and daughter Debbie Junker. Adopted children are Sarah Molyneux, Rebecca McKittrick, and Meaklo Montoya. She is survived by her grandchildren Kaytyln Junker, Robert Junker, Daniel Junker, Timothy Junker II, Steven Junker, Anthony Louis, Tyler Mc Kittrick, Collin Mc Donnell, Alexis McKittrick, and Khalina Montoya,