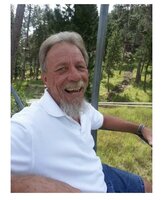 Randy Verl Parsons, age 65, of Centennial Colorado, passed away on January 6, 2022. He grew up in Lakewood, Colorado and attended Lakewood High School. He was always known to be the life of the party and didn†™t know a stranger. His boisterous laughter could be heard across a crowded room. He leaves behind his son Jeremy Parsons of Parker, Colorado as well as his two grandchildren Gabreella and Stewart. He is also survived by his parents Nancy and Earl Parsons, his brother Dan Parsons and sister-in-law Patti as well as their four sons, and his sister Kelly Severson and brother-in-law Jay and their 3 children, as well as several great nieces and nephews. He was preceded in death by his daughter Jennifer Parsons. Randy was born in Denver, Colorado on January 25, 1956. He had a passion for riding Harley Davidson motorcycles and his spirit animal was a bald eagle. In his younger years, he enjoyed family camping trips and other family adventures. Randy and his son Jeremy enjoyed spending time together flying RC planes and in his later life he went on multiple cruises and spent time in the hills in both Blackhawk and Central City with his former spouse Kris Dunlap. He had a wicked smile, infectious laugh, and loved with his whole heart. He will be greatly missed by his family. A Celebration of Life Will be held on Sunday, January 23 from 2:30 PM to 6:30 PM at The Elks Lodge 3690 S. Jason St. Englewood, CO 80110