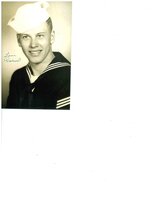 Darwin Lloyd Verke was born December 20th, 1936 at Devil†™s Lake, ND to Lloyd Henry Verke and Enid Caroline Sletten, the eldest of 6 children. He passed away January 31st, 2022 at Lutheran Medical Center in Wheat Ridge, CO. He was baptized and confirmed at Zion Lutheran Church in Churchs Ferry, ND. He graduated from high school in Churchs Ferry in 1954. At the age of 17 he enlisted in the United States Navy, where he served 3 years. He was assigned to the submarine service on the USS Pomodon SS486 as a sonarman. After serving in the Navy, he graduated from the Lake Region Junior College, attended a semester at NDSU and later enrolling at North Dakota State School of Science in the electronics department. He worked as a radioman for the Great Northern Railroad at Havre, MT for 3 years before accepting a position with AT&T in Denver, CO where he worked until retirement. After retiring from AT&T he worked on communications for the new Denver International Airport for 7 years. He was a member of King of Glory Church, the Arvada Elks #2278, the American Legion Post, the Golden Gun Club and the Arvada Rifle & Pistol Club. Darwin married LaVon Berven on March 24th, 1962 at St. Petri Lutheran Church in York, ND. They have two children, daughter Carol and son Carl. Darwin was an avid hunter, enjoying trap and competitive shooting matches. He built many black powder pistols and rifles. He loved military museums and walked the shores of Normandy, fields of Gettysburg, and Little Big Horn. He was an avid reader with many interests including building doll houses for his granddaughter and many stringed musical instruments. Darwin especially enjoyed spending summers at the farm in North Dakota. He kept up the maintenance of the old farmhouse where he loved entertaining family and friends. He never ran out of subjects to talk about! Darwin was a kind, hardworking, patient, generous and loving soul and will be greatly missed. Darwin is survived by his wife of 59 years; a daughter, Carol Thompson (Tony) of York, ND; a son, Carl Verke (Melanie) of Thornton, CO; 2 granddaughters: Ann Pederson (Brad) of Belle Plaine, MN and Arnikka Thompson (fiancÁ© Anthony Schreier); 2 sisters: Bonnie Rolle (Milton) of Minot, ND and Clarice Leichty of Jamestown, ND; one brother: Robert Verke (Kay) of Bismarck, ND; one brother-in-law: Rick Reymen of Mendota Heights, MN; 2 great-grandsons: Adrik and Alek Pederson; 2 sisters-in-law: Cleo Berven of Minot, ND and Barb Berven of Spokane Valley, WA; several nieces and nephews and one uncle, Milford Sletten of Kalamazoo, MI. He was preceded in death by his parents; his father and mother-in-law, Harold and Hazel Berven; a brother, Harlan of Medota Heights, MN; a sister and brother-in-law, Frances and Richard Raper of Douglas, WY; and one brother-in-law, Reuben Leichty of Jamestown, ND. A Memorial service will be held Saturday, February 5, 2022, 1:00 pm at the Arvada Elks Lodge, 5700 Yukon Street, Arvada, CO 80002