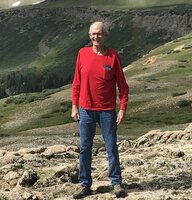 Harry B. Emmans Jr. Harry Burton Emmans Jr. passed peacefully at home on February 8, 2022 with his wife Glenda at his side. He was 80 years old. Harry was the son of Harry Burton Emmans Sr. and Mary Cross Emmans of Ledgewood, New Jersey. He joined the Navy after graduating high school and served on the destroyer USS Gainard as a Machinist Mate 2, and was involved in blockading Cuba during the Russian Missile Crisis. After an Honorable Discharge from the Navy he worked as a machinist for a number of years, and eventually took over operations of the family business Emmans & Emmans in Ledgewood, N.J. Years later Harry relocated to Colorado and worked as a financial estimator with Lockheed Martin, involved in the Titan Missile Program. He retired from Lockheed Martin to become a gentleman rancher in the Hartsel area and enjoyed the mountain lifestyle very much. Harry is survived by his wife Glenda, children Heather, Kelli, Brian, Jennifer, and Jodi; stepsons Mac and Lucas; and brother Scott. A celebration of life is planned, and contributions to the Colorado Humane Society on his behalf would be welcomed.