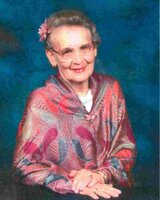 My mom was born November 16, 1937 in Spokane, Washington to Raymond and Mildred Pike. She was the fourth of 5 children- Nadine, Lewis, Yvonne, Norma, and Ida. Her siblings preceded her in death. She was deceased March 15, 2022 in Denver, CO She was a widow at the time of her death. My mom attended Rogers High School through the ninth grade She is survived by her daughter Vera who lives in Lakewood, CO and her daughter Violet who lives in Santa Cruz, CA Her son Paul preceded her in death July 4, 2000. Her husband William Gevara preceded her in death March 10, 2010. My mom is survived by many grandchildren and great-grandchildren. My mom married my father Joseph Garcia two weeks before her sixteenth birthday in Coeur d'Alene, Idaho. My dad was stationed in Spokane in the Air Force. He was discharged from the service after their marriage and they moved to Denver, CO, where my dad is from. I was born on May 13, 1954 at Colorado General Hospital. Violet was born May 19, 1955 at Colorado General Hospital My dad moved the family to the LA area. He worked for government contracts inspecting electronic parts for the spacecrafts in the 1960's. My mom stayed home to raise us children. Paul was born on October 28, 1957 in East LA. We moved frequently in the LA and San Francisco areas when a government contract ended. My mom babysat other children to earn extra money. She enjoyed reading, cooking, baking, playing games with the family, and going to movies, As a teenager, she enjoyed roller skating and going to the Salvation Army camp during the summer. Her family raised her in the Salvation Army Church. Her parents divorced when she was younger, and my grandmother raised her five children. Faith and family were very important to my mom. She became Catholic after she married my dad. she was the one who faithfully took us to mass each week. In 1968 my family moved back to Denver. My parents were married almost 23 years when they got divorced. My mom met Billy who was visiting family in Denver. He lived in Sacramento, CA. My mom joined him there. They were married on June 23, 1989. Billy has three sons, Rick, Nick, and Dominick. Nick preceded my mom in death. I was married to Gene on July 1, 1972. We have two sons, Adam and James. we were married almost 15 years when we were divorced. I moved with my son James to Sacramento. My sister lived there with her twin sons Kevin and Jose. My brother Paul was married to Tammy and they have two daughters, Amber and Joleen. After their divorce, Tammy moved her daughters to Missouri. Paul also lived in Sacramento. Billy and my mom moved to Calhan, CO to be near Nick who lived in Yoder at the time. My mom had retired from CSI, a company which did billing for Medicaid. Billy retired as a barber. I had moved back to Colorado March 2007. My mom moved to senior apartments in Denver after Billy's death. She worked a few days per week at the Auraria campus daycare. She also did volunteer work at the Francis Heights apartments where she lived. In January 2021 my mom almost died from covid. After rehab, she was able to return home. September 30, 2021 my mom suffered a stroke on her right side. She had surgery on her cervical spine October 1 due to hemorrhaging. after rehab, she was transferred to a SNF. When I realized that she was dying, I informed my sister Violet and her sons Kevin and Jose. They were able to spend quality time with her before she passed away. I was present with my mom Tuesday evening when she took her final breath. She was at peace at last. My son James and Carrie and several of my grandchildren were able to spend time with my mom. It was such a blessing.