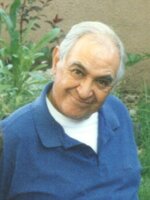 Samuel Sosa, Jr., of Golden, Colorado, died April 6, 2022. He passed peacefully in his home surrounded by his beloved wife, Lupe, and his children and grandchildren. Sam was born on April 30, 1929, in El Paso, Texas, to Samuel Sr. and Adelina Sosa. He lived in northern New Mexico until age 3, when he moved to Sanford, Colorado following his mother†™s death, and was raised by the Jaramillo family. Sam later moved to Albuquerque to attend Menaul, a Presbyterian boarding school, where he thrived academically, as a student leader, and as an athlete, lettering in football and track. After graduation, he attended Texas Western College, majoring in Political Science and History. Sam paused his college education to enlist in the U.S. Navy from 1951 to 1956. He served in the Korean War aboard the USS Eversole, touring Japan, the Philippines, and western Pacific Ports. Following enlistment, Sam earned his BA in Political Science and attended law school. He joined Alpha Phi Omega, a service and leadership fraternity. In 1965, he earned a BFA in Architecture from the University of New Mexico and practiced architecture for more than 30 years. While at Texas Western, he met Guadalupe Macias Anaya. They were married in 1957, in El Paso, and were inseparable throughout their 64-year marriage. Settling in Albuquerque, Sam began his federal service career with the Bureau of Indian Affairs. With Cindy (O†™Dougherty), Samuel III, Carlos, Michelle (Sosa-Mallory), and Lisa, they fulfilled their wish for a large family. In 1968, Sam designed and built their first dream home that overlooked the Rio Grande. In 1971, the Sosas moved to Washington, DC, and transferred to Denver in 1973. Sam worked for the General Services Administration at the Denver Federal Center until his civil service retirement. He built three more family homes in the Lakewood/Golden area. Sam was a little league coach, a silver jewelry designer, and a SeaBee in the U.S. Naval Reserves. As a SeaBee, he helped to restore the historic Georgetown Loop. Sam launched an encore career as owner of Sosa & Sons, designing and building several homes in the Golden/Pleasant View community. At age 80, he resumed jewelry making, selling many pieces and donating some, but mostly gifting his work to his family and friends. In addition to his five children, Sam cherished his eight grandchildren: Caitlin, Aaron, Elise, Aubrey, Mica, Asher, Drew, and Olivia; and charmed his four great-grandsons: Arrow, Callan, Everett, and Stetson. As a father- and grandpa-by-affection, Sam warmly welcomed Marty O†™Dougherty (Cindy), Carson Mallory (Michelle), Dawn Lyons (Carlos), Jordan Heykoop (Aaron), and Christian Harrington (Caitlin) into the fold. In addition to Lupe, his children, and grandchildren, Sam is survived by his brother William Richard Sosa of Placerville, California, and several nieces, nephews, and cousins. His mother, father, and sister, Janet Calderon, preceded him in death. Sam†™s family will celebrate his remarkable life on Saturday, July 30, 2022, 1:00 p.m., at St. Luke†™s United Methodist Church, 8817 S. Broadway, Highlands Ranch, CO.