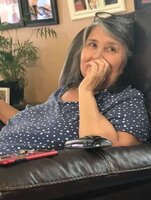 Our beloved mother, grandmother, sister, and friend Virginia Gloria Gonzalez passed away on April 10, 2022, in Commerce City, Colorado from Lung Cancer. She married Benjamin GonzÁ¡lez in August 1973 and they settled into their home in Commerce City. Gloria was a housewife for many years raising their four children, she loved making homemade tortillas, and delicious Mexican food for her family. Later in life, she worked for Alco/Duckwall Department store in Commerce City. In her many ventures, she made life-long friendships and her passing leaves a hole in our hearts that cannot be filled. After Benjamin†™s passing in 2002, Gloria dedicated her time to help raise her beloved grandchildren. Her most passionate interests included ceramics, cross stitch, quilting, crocheting, and most of all caring for her family. She will be remembered for her unconditional love and her amazing ability to make everyone laugh. Gloria was predeceased by Benjamin (husband), Antonio (father), Viola (mother), Herman (brother), Utimio (brother), and Harold (brother). She is survived by her: Siblings: Lawrence (brother), Gilbert (brother), Antonio (brother), Alex (brother), Arnoldo (brother), Betty (sister), and Sandra (sister). Children: Herman (Sonya), Ben, Yvonne (Efrain), and Virgil. Grandchildren: Gabriel, Desedio, Thayla, Jose, Estevan, Noah, Allie, Alonzo, Efrain II, Samantha, and Virgil. Great grandchildren: Araya, Kaylani and Jiraiya. A funeral service will be held on April 22, 2022, at 9:30 at Our Lady Mother of the Church, located at 6690 E 72nd Ave, Commerce City, CO 80022. She will be laid to rest at Olinger Highlands 10201 North Grant St.