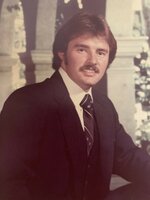 Born the first of 8 children on January 12, 1957 to Richard (Dick) and Dorothy Weber in Butte, NE, Joe passed away peacefully on April 8, 2022 in Lakewood, CO at the age of 65. From a young age, Joe was an avid athlete. He was an all star high school quarterback, sprinter/jumper in track, pitcher and point guard at Bergen Catholic High School in Nebraska before continuing his legacy at Weld Central High School (CO). Upon graduation, he held numerous athletic records, and was named †˜most outstanding football player†™. Shortly after, he married Nancy (Gettman) Weber also from Weld Central High and the two started a family. Joe joined the Air Force and was on active duty for 4 years as a Missile Facilities Instructor, where he taught students how to maintain and repair the Minuteman III missile sites. He was stationed in both the midwest and Texas. Joe contributed to the 321st Strategic Missile Wing at Grand Forks Air Force Base. After his service, Joe studied Mechanical Engineering at Colorado State University (CSU) and began his career in engineering at the Naval Weapons Center (NWC) in Ridgecrest, CA. Joe†™s work brought him and his family (two sons, Anthony, Nicholas and daughter Katie) to Colorado Springs where he continued to work in engineering with agencies like Texas Instruments, Coors Microlithics, TRW, and Intel. Joe was greatly involved and had a strong influence in his children†™s lives: introducing them to basketball, tennis, music (Michael Jackson†™s album †˜Thriller†™ was a favorite) and so much football! Go Big Red! One of their favorite memories of Joe is running football plays and playing badminton in the backyard. Joe spent many, many hours watching and supporting his kids in all different sports (tennis, basketball, baseball, and volleyball) and band concerts (which included at home practice sessions for flute, saxophone and the drums). In 2002, Joe began a career with Ball Aerospace with an expertise in Computational Fluid Dynamics (CFD). Through this work, Joe was able to provide analyses on radomes and antennas in supersonic flight involving aerodynamic heating. Additionally, Joe provided testing for Ozone Mapping and Profiling Suite (OMPS) which were mounted to the Joint Polar Satellite System (JPSS)-1 and 2. Throughout Joe†™s career he was able to work on a number of projects including: Sidewinder Heat Seeking Missile, Tomahawk Cruise Missile, High Speed Anti-Radiation Missile (HARM), Joint Striker Fighter (X35), and the DDX (next generation destroyer). After retirement, Joe found time to dedicate to taking photographs, watching his grandkids play sports, golfing with his brothers, biking with his girlfriend, enjoying beers and checking out museum exhibits with his daughter. Joe is survived by his 3 children, 4 grandchildren, 3 grand dogs, 7 siblings, 18 nieces and nephews and his girlfriend Lisa. We are saddened by his passing and are grateful to have shared his final moments with Joe which included a slight tease that he picked Kansas to win the NCAA tournament. He is missed and he is loved greatly. A Celebration of Joe†™s Life will be held at the Hilton Garden Inn,14275 Lincoln St., Thornton CO on Saturday June 18, 2022 from 2-5pm. If you are inclined to do so, feel free to bring a favorite memento or picture of Joe to share. There will be light snacks and a cash bar available. If you†™ve not responded to the Save the Date and would like to attend the Celebration of Life (all are welcome), please connect with Katie Weber at weber.ktm@gmail.com. In lieu of flowers, the family is asking for donations to be made for either: https://www.mightycause.com/organization/Colorado-Parks-And-Wildlife https://www.coloradogives.org/coloradotennis/overview?step=_