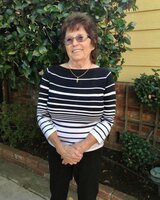 It is with a heavy heart that the Family of Francine Nation announce her passing on Wednesday April 13th, 2022, at age 90. Francine Teresa Menard was born on September 1st,1931 in Jefferson South Dakota to Armand & Gertrude Lamoreaux/Menard. She was the third born and eldest daughter of 10 siblings in which 4 brothers have preceded her in death. Armand Menard-Iowa, Wayne Menard-California (Deceased), Melvin Menard-Colorado, Sally Menard/Thompson-California, Francis Menard-California (Deceased), Twins, Helene Menard/Jones-California & Duane Menard-California (Deceased), Carol Menard/Stepps-California, and Andy Paul Menard-California (Deceased). Francine and her siblings all attended Catholic School and grew up in the Catholic faith and Francine remained a devout Catholic throughout her life. She met Alfred Nation in Sioux City Iowa and they married on August 11th,1951. They chose just a few years later to move and raise their family in Commerce City, Colorado where she resided with her husband Alfred until his passing, which was not too long after their 50th Wedding Anniversary. Francine remained in her home in Commerce City until her passing. Francine and Alfred had 8 Children, 24 Grandchildren, 31 Great Grandchildren and 15 Great, Great, Grandchildren. Francine worked throughout her life and her last place of employment was El Jardin Mexican Restaurant in Commerce City where she worked as a waitress from 1982 until 2002 when she retired at age 70. She was preceded in death by her Husband, Alfred Allen Nation, and two children David Russell Nation and Sally Ann Morgan/Nation. She is also survived by children, Wayne Nation & Wife Darlene, Donna Nation/Reidenbach & Husband Chuck, Alfred (Budgie) Nation & Wife Liz, Connie Nation/Robb & Husband Scott, Laura (Lori) Nation/Martinez & Husband Ben, Francis (Sass) Nation & Wife Jennifer, James Morgan Husband of Sally Nation/Morgan. Francine lived her life to the very fullest up to her passing. She will be remembered always as the young looking lady full of energy and the life of the party, who left you with a smile and laughter with her quick wit, humor, action, and words. She was a true family leader to us all and welcomed all into her home with open arms. She represented a true light of life with her honesty, kindness, integrity, forgiveness, patience, strength, and most of all her ability to show and teach us to always be Family Strong. Rest In Pease to the †œHeart of our Family†� as you take your place in Heaven with our Savior and Lord, Jesus Christ. We hope that you will join us for the final service for Francine which will be held on Friday April 29th,2022 at St. Augustine Church 178 South 6th Ave. Brighton CO 80601. Rosary 10:30am followed by the Requiem Mass at 11:00am. Immediately following the Requiem Mass there will be a gathering and lunch at the St. Augustine Hall to celebrate her life.