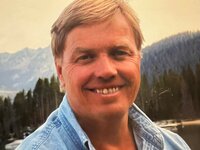 James Robert Peters of Golden, Colorado passed away May 8, 2022. Jim was born on July 7, 1958 in Chicago, Illinois to Margaret and William Peters while the family was living in Wood Dale, Illinois. The family moved to Chicago and then later to Park Ridge, Illinois, where Jim graduated from Main South High School in 1976. He attended the University of Illinois Champaign-Urbana and received a B.S. in Electrical Engineering in 1980. He worked as a sales engineer for a few years before deciding to return to school to get a MBA in Finance and Statistics from the University of Chicago Booth School of Business in 1984. Jim was interested in the financial markets and economics and worked many years in sales and marketing in the securities industry. In 1999 Jim had an opportunity to move to Colorado. It fulfilled a lifelong dream of living in the West. He loved the outdoors. As a child, he and his family took many trips to Lac Seul Ontario. They enjoyed fishing, camping, and just being together. His passion for the outdoors was only exceeded by his love for his daughter, Mariel. He was proud of her accomplishments and was excited for her to pursue her college education. Jim's humor, intelligence and love will be missed by his numerous family members and friends. Jim is survived by his daughter Mariel Peters, Golden, Colorado; parents Marge and Bill Peters of Hayden, Idaho; his four brothers, William, Peters of Florida; John Peters, wife Anita of Barrington, Illinois; Thomas Peters of Illinois; and Robert Peters and wife Patricia of Priest River, Idaho and his beloved nieces and nephews. A celebration of life will take place later this summer in the beautiful foothills of Golden, Colorado.