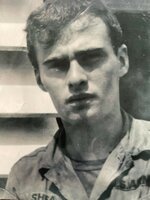 Jim was born in Manitowoc, WI on December 7th, 1948 to the late James and Virginia (Puff) Shea. Jim attended St Boniface Parochial school and Lincoln High school in Manitowoc, WI. After High School Jim enlisted in the United States Army Serving in Germany and a tour in Vietnam. Afterwards, he returned stateside to Fort Carson, CO and was honorably discharged. Jim moved to Milwaukee, WI where he attended schooling for electronics. While there he met his wife, Susan whom he married October 6th, 1972 after their move to Colorado. Jim had a passion for martial arts and studied with Korean Taekwondo master Kim and achieved 2nd degree blackbelt status as well as opening a Taekwondo studio on Colfax Avenue in Denver where he taught many youths and adults alike in this beautiful art. Jim loved motorcycling, playing guitar and talking to people all over the world on amateur radio. He had a passion for music and would love to discuss the greatest artist and works of all time for anyone that would listen. He had an incredible wit and sense of humor that touched the lives of most that he encountered. He loved telling jokes and opening the minds of those he spoke with and also spending time with friends, family and his great granddaughter, Emma Pearl, who made him happy with her contagious smile and silly ways. Jim is survived by: his siblings Mary (Doug) Cline, Florence (John) Suchocki, Barb (Bill) Grosshuesch, and Tom Shea; his children, Tracy Shea Lewis, Tony Shea, Kerry Shea, Susan (Jim) Stelzer Karpowitz, Deborah Shea, and Melissa (Scott) Malito; his Grandchildren Tony and Elizabeth Karpowitz, Dakota and Makenzie Grom, Taylor Malito, Katie Lewis, Andrew Lewis, James Lewis, Dokie Doxtator and Roy Doxtator; and his great grandchildren Emma Pearl and Brookelyn Lewis. Many nieces and nephews and other relatives also survive. Jim was preceded in death by his wife Susan, his parents James and Virginia Shea and his grandson Daniel Lewis. Funeral Services to celebrate Jim†™s Life will be held Tuesday May 24th from 4-7 PM at Aspen Mortuary for visitation and again On Wednesday at 10:30 am until the time of service. The celebration will continue at 1PM at Fort Logan National Cemetery Where Military Graveside rites will be accorded. Jim will be sadly missed by all his family and friends, but we know that he is now at peace in heaven reunited with the love of his life and family he loved dearly that went before him.