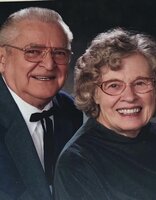 . Helen Marie Wirkus died and was called home to our Lord on Monday May 23, 2022. Helen was born November 8, 1932 in Denver Colorado to Irene Marie (Tobin) Blatter and Anthony John Blatter, who proceeded her in death. Helen attended St Philomena†™s Catholic school until the 3rd grade when the family moved to Westminster. It is here she would complete her education and graduate from Westminster High School. She stayed close to her classmates and with her brother Tom was very involved with the class reunions. Growing up, Helen was involved in 4H, she loved riding horses, especially her beloved horse †œPeriod†�. Helen even possessed a few trophies won for barrel racing. She was in girl scouts, ran track, played softball, basketball, sang in the choir and was a majorette. She also played the Coronet in the high school band with fellow Coronet player Ray Baca, whom she would later marry. This marriage was later to be annulled by the church and Helen would marry her newly found soulmate Marvin Wirkus in 1969. Helen gained 2 stepchildren at that time and is survived by Deborah (Wirkus) Hackencamp, Robert Wirkus and her own 4 children: Theresa Barchenger, Stephen, Douglas and Jeffery Baca. Also surviving Helen are her sisters Rosemarie (Blatter) Bergin, Patricia (Blatter) Berry and her brother Frank Blatter. She was proceeded in death one week earlier by her brother Tom Blatter. She is further survived by many beloved nieces and nephews. Helen was grandmother to and is survived by 14 grandchildren. Timothy, Daniel and Brian Fridge. Leon, Marie and Angie Baca. Jacob and Kimberly Bollhoefner. Mich Vanzo. Lajuanna (Baca)Killingsworth and Kiely Baca. Samantha (Wirkus) Neal, Robert Wirkus and Tyler Wirkus. In addition she is survived by 15 great grand, children and 1 great, great grandson. Helens career included working as a stenographer for Mountain Bell, Travlers insurance as a secretary, Wolco department store in customer service, Bennnet and Associates (a metal finishing supply company) as office manager and later Storage Technology as electronic assembler, from where she retired in 1991. Helen loved traveling, square dancing, card games, hiking, camping, fishing, ceramics and oil painting.