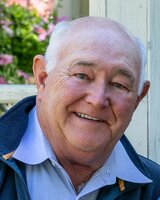 George Michael O†™Hara, 74 years of age, died peacefully Sunday, June 12, 2022, at his home in Lakewood, Colorado. Born in Laramie, Wyoming April 7, 1948, to his parents, Vivian Heward and George Everett O†™Hara, who was a Train Master for Union Pacific Railroad. He was the third child of four siblings and grew up spending his summers working on the railroad, building tree houses, and catching critters with his faithful dog Webster. George graduated from Salina High School in 1966, participating in track, football, and band. He earned his Bachelor of Science in geology at Kansas State University in 1971 and began his geology career with Cameron Engineers, working there until the office closed in 1983. George married Christy Steinwart of Ogallala, Nebraska on October 5, 1974; the couple spent 46 happy years together and raised three children. His work with Western Fuels Association started in 1985, and after working there for 25 years, he retired in 2010 as the Director of Technical Services. George was an accomplished outdoorsman, who loved to golf, hunt, fish, and camp. You were never a stranger for long around George; he was a friend to all. His wonderful sense of humor, anecdotes, and hilarious stories will be missed by all who have known him. With the passing of George, he leaves behind his wife Christy O'Hara; sister Amy Sexson; brother Ed O†™Hara; daughter Jennifer Edwards and son-in-law James Edwards; son Brian O†™Hara and daughter-in-law Katie O†™Hara; daughter Carrie Palmer and son-in-law Troy Palmer; his grandsons Cayden Edwards (13), Parker O'Hara (6), Everett Palmer (5), Connor O'Hara (2), and granddaughter Emma Palmer (6). A memorial service will be held to celebrate George†™s life on July 5, 2022, at Green Mountain United Methodist Church 12755 W Cedar Drive Lakewood, CO 80228. Following the service, we will be gathering at The Retreat at Solterra 15250 W Evans Avenue, Lakewood, CO 80228.