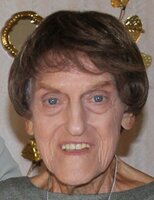 Angeline (Angie) Miller Krueger, 83, passed away at home on Friday, July 8, 2022. Angie was born on August 29, 1938, in Towner, North Dakota, the 6th of 7 children born to Christian and Kathryn Miller. She grew up in Minot, North Dakota where she met Eugene (Gene) Krueger. Angie and Gene were married on June 19, 1957, in Minot where they lived and had 4 sons †" Thomas, David, Bruce and Scott. They then moved to California and had a daughter †" Kristi. In 1971, the family moved to Arvada, Colorado where they resided until their deaths. Angie and Gene had been married for 63 years when he passed away in 2020. Angie was a wonderful mother and homemaker. She retired from Albertsons in 1998 where she worked in the bakery. She was a member of St Anne†™s Church in Arvada. Her favorite pastimes included spending time with her family, playing cards and bowling. Angie is survived by her children †" Thomas (Debby), Westminster; David (Noelle), Gig Harbor, WA; Scott (Wendy), Highlands Ranch; and Kristi (Doug) Anderson, Westminster; grandchildren †" Jennifer (David) Rivera, Thomas Jr (April), Elizabeth (Chad) Fox, Ashley (Casey) Procter, Megan (Brooks) Meadows, Samantha (Alex) Nieves, and Jade. Angie also had 15 great-grandchildren. Angie was preceded in death by her husband Gene, son Bruce, great-grandson Evan Procter, her parents and her brothers and sister. In lieu of flowers we ask that you donate to the American Diabetes As