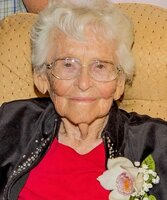 Goldie Lenora DeWild, a loving mother, grandmother, aunt and friend passed away peacefully on September 5, 2022, at Greenridge Place, in Westminster, CO at the age of 102.

Goldie was born December 1, 1919, in Logan, KS to Henry and Mary Ellen Case.  Goldie was one of ten children, she had six brothers and three sisters.  She attended school in Phillipsburg and Logan, KS.

On April 18, 1936, at the age of 16, Goldie married Herman Arthur DeWild in Densmore KS.  Goldie and Herman had four children, two sons and two daughters.

A viewing will be held Thursday, September 22nd at 9:30 am. A Funeral Service celebrating Goldie’s life will immediately follow the viewing at Aspen Mortuaries – Arvada, 6370 Union St, Arvada, Colorado.  Interment will be at the Arvada Cemetery, 11:30 am