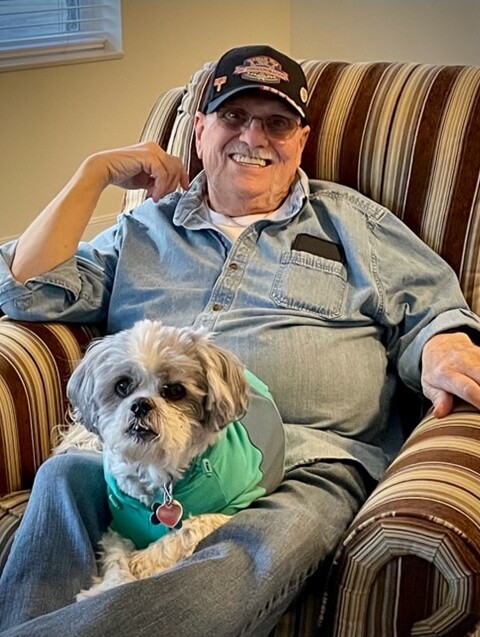 It is with deep sorrow that my beloved Human, Robert “Bob” Sharp crossed over the rainbow bridge…umm, I mean passed away on September 22 of end stage liver disease.    I, Teddy, his beloved dog, was always by his side so it was most fitting that I wrote his obituary.  I suspect there was lots of life lived before I came into the picture in 2008 so I asked my new Mom, Laura to help me out.

He was born on October 7, 1947 in Grand Rapids Minnesota.  I bet they have good dog treats there, sorry love my treats!  His human parents were the late Bernard “Bernie” T.  Sharp and Irma L. Newton and was the youngest of three children; Coni (Sharp) Carter and the late Ted Sharp. Hey his name is like mine; I wonder if he liked treats too!  They lived in Minnesota until they moved to Colorado in 1956.  I am sure glad they moved here, otherwise he couldn’t have been my Human.

He graduated from Westminster Highschool in 1966. Rumor has it, they only graduated him so he didn’t come back.   From the stories I have heard (I just pretend I am sleeping), my Human loved cool cars, good music, cute girls and often up to no good with his buddies. He enlisted in the US Marine Corp in the summer 1966.  He would always say, “I went in as a boy and came out a man”.  After serving in the Vietnam War he came home for good in 1968, then served as a US Marine Corp Reservist until 1972.   Even though My Human didn’t talk about the war freely he was a proud Marine through and through. Think he loved being a Marine as much as I love treats!

In 1969 My Human became a fire sprinkler fitter and joined Fire Sprinkler Local 669.  He was dedicated to his trade until he retired in 2004 and was a Local 669 53-year member when he passed away.   He cherished the brotherhood and friendships he had along the way.   How I I would love to share some of the stories I’ve heard but may not be appropriate to share in his obituary.

In 1973 he married the love of his life, Marjorie “Margie” and became an instant dad to her three children; Kevin Brian and Sheri, then 1974 his daughter, Laura was born. My Human often referred to her “As his little girl.”  Between my Human’s 4 children and 15 grandchildren I always had someone to play with me and never went out with a treat.   Did I mention I love treats!

Some of My Human’s favorite things were to travel, hunt, fish, tinker in the garage, go to the “Hill” to gamble and spend time with me. He rarely missed his grandchildren's activities and looked forward playing horse collar with his friends the Elks.  He may disagree, but above all else he loved his truck and ice cream, both of which I have lots of memories sharing with him.

My Human was known for “never meeting a stranger.” His smile, laughter and wit were loved by everyone who knew him.  He cherished his family friendships and was known as “Uncle Bob” to many.   He was the best human any dog could ask for as there was endless love and treats.

He asked me to pass along this import message; Don’t cry because it’s over. Smile because it happened by Dr. Seuss.

Join his family in celebrating his life:

Casual, where something that remind you of Bob; t-shirt, hat, jersey

Etc. Light dinner with coffee, ice tea and water.  The bar will open for the purchase of

In leu of flowers donations can be donated to Dumbs Friends League:

To send flowers to the family or plant a tree in memory of Robert Sharp , please visit Tribute Store
Monday
10
October