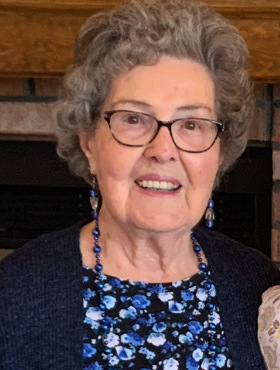 Mary Raven of Arvada, Colorado, passed away peacefully at Brookdale Littleton Senior Living, on Thursday, January 5, 2023. She was 93 years old.

Mary was born in Fulton, Missouri, on October 26 1929, to Leonard and Cora Riddle and moved to Golden, Colorado with her parents in 1948. She met and married Jack Raven in 1953 and were married almost 65 years before he proceeded her in death on September 10, 2018.

Mary’s smiling face was familiar in the 1950’s small town of Arvada where she worked at the telephone company and waited tables at Ralph’s Cafe until becoming an at-home-mom to their daughters, Linda and Diana. She continued waiting tables at Bernard’s Restaurant on Ralston Road, and many from the Rotary and Kiwanis clubs remember her excellent meal serving service. After the girls were grown, Mary worked at the First National Bank of Arvada and Key Bank. She enjoyed the people and made lots of friends with co-workers.

Mary was excited to volunteer at the Arvada Center for the Arts and Humanities when it opened in 1976. She served over 6,000 volunteer hours as an usher, hospitality server and cashier. She loved seeing the dress rehearsals of the plays and she enjoyed the concerts. And of course, her most favorite part was meeting and visiting with fellow volunteers and the event attendees.

She was a member of the VFW Auxiliary, the Arvada Lionbelles, and the Arvada Lion’s Club. She served as a volunteer at the Arvada Historical Society, and worked the 9Health Fair for many years.

Mary’s hobbies include crocheting, reading, cooking, camping and fishing. Many were the recipients of her rhubarb pie and homemade cookies. She enjoyed travel and hosted many card parties. Hand and Foot Canasta with her grandchildren always put a smile on her face. Her biggest enjoyment was spending time at their mountain cabin in Grand County. It truly was her happy place.

She is preceded in death by her husband, Jack, her parents, Len and Cora, and brother Robert.

To send flowers to the family or plant a tree in memory of Mary Raven, please visit Tribute Store

Share Your Memory of
Mary
Upload Your Memory View All Memories
Be the first to upload a memory!
Share A Memory
Send Flowers